Rise And Fall Of The Internet

Rise And Fall Of The Internet PDF Version
Think in still pictures and the internet seems same as usual. Think in moving pictures and a lot has happened in just six months. The early internet through the days of America On Line, was an unprecedented phenomenon. Never in history had an institution developed and become useful – based on cooperation by total strangers. Cooperation does occur privately but only among a few with common interests. Cooperation under a leader’s agenda is a guaranteed disaster.

Oddly, I was quite computer savvy during the 80s and 90s. I ran a business using Commodore 64 computers.  I wrote my own programs in basic. Commodore had by far the best operating system of all. Bill Gates, started Microsoft and ran Commodore out of business. That was the beginning of Big Tech and the end of good natured cooperation among the world’s intellectuals and academics.

To give an idea of how much cooperation there was, I was working on a study of natural cycles on stock prices. I put a post up on a math newsgroup asking for a formula for finding a non – linear correlation. In five minutes, I got my answer from the head of the math department of a major university. Higher education was different then as  well.

Here is a question to entertain: How big would Facebook have become if having a page had cost $1.00 per year? Ask similar questions about the others.

Yahoo was the go – to search engine. Then Google showed up, took the lead, and the big tech movement had begun. Google actually was a search engine in those days. In time the search function gave way to advertising services and manipulation of users. The mobile movement took hold. My Space came and went. Facebook came along and usage of everything exploded.

Now, after decades of being manipulated and lied to, the public has a severe case of internet fatigue. The internet of old is gone. Its replacement is dying. It won’t die completely. It will be around. People won’t use it as they have up until this point. Big tech will be more like utilities. It will have its place but the excitement and instant profits will be gone. A lot of people use it today the way they used to use the Yellow Pages. Censorship will be a thing of the past.

On the upside, for bloggers like myself, the demise of social media may spark the return of individual web sites. Regardless, it won’t be a great source for self-promotion.  I am up to 16 confirmed readers. I intend to keep writing, just based on that.

In the meantime, I am working on a ebook to replace the one I just published. Basically I am an average guy who just happened to have a flair for abstract thought and found a better way to interpret economics and political science. Those who take the time to discover the reasoning behind my articles, will find the fantasy – free approach quite helpful in interpreting national and world events. I have indeed broken the code.

We all know that it is written, “You shall know the truth and the truth will set you free.” That really is more than a platitude. Look at the world as it is without the handicap of the prism of fantasy, and that is the essence of the fantasy – free approach. The truth is not free. The process of getting there is traumatic. In the beginning…. finding the truth destroys happiness. It takes time, but eventually peace replaces happiness and it is worth it. Happiness does return. It is always temporary. That is no longer a problem like before, because peace still remains. 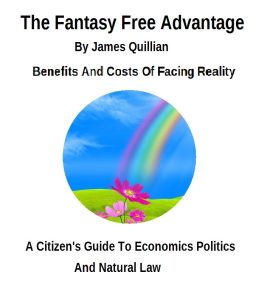